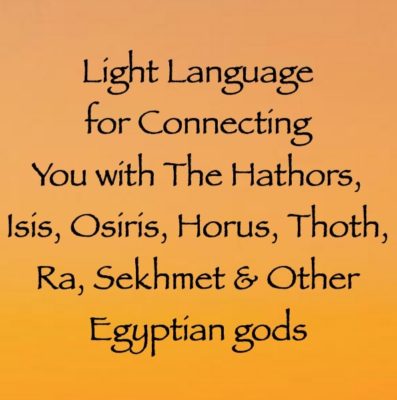 This Light Language of Just Over 6 Minutes is for Connecting You with The Hathors, Isis, Osiris, Horus, Thoth, Ra, Sekhmet & Other Egyptian Gods

How Will this Light Language Connect You with the Egyptian Gods?

The Egyptian gods. Who were they? Where did they come from? We now know that they were in fact aliens, and that they gave the Egyptians so much wisdom, mated with them, helped build the pyramids, and so much more. I hear people asking about their connections with the Egyptian gods/E.T.s all the time, and that’s why I created this light language transmission. When I channeled this light language, I infused it with the intention, vibration, and galactic light codes for connecting us with the Egyptians in the here and now. Making those connections can mean that you will be able to channel them, retrieve past life memories of learning from them, and receive the wisdom and energies that they have to share with you in the present moment. Listening to this light language will open you up to the long-lost connections you have had with the Hathors, Isis, Osiris, Ra, Sekhmet, Horus, Thoth and any other E.T.s from that era of the Egyptian Empire. Love! <3