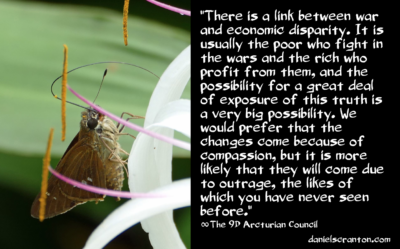 We have begun exploring the possible timelines for your next big leap forward. We have examined the different ways in which humanity can make that leap, a leap that will take you to a time of less economic disparity and less war.

Now, there are timelines that exist where a great deal of corruption would need to be made part of the public record, and there are timelines where the changes that will occur would be the result of an outpouring of compassion, due to more awareness of the situation that you are currently in.

There is a link between war and economic disparity. It is usually the poor who fight in the wars and the rich who profit from them, and the possibility for a great deal of exposure of this truth is a very big possibility. We would prefer that the changes come because of compassion, but it is more likely that they will come due to outrage, the likes of which you have never seen before.

That collective anger over the way that your economies are structured is something that’s been building up for quite some time, and the outrage over who is profiting from these wars is something that is also building. Now, someone who is very well known could make a very important film about all of this, and it could win all of the awards as well.

This is one of the bigger possibilities that you have to initiate the changes in governments and leaders, changes that will affect economies and lead to massive disarmaments. This is the most likely timeline that we see, and we see this happening in the next few years.

Purchase The Arcturian Council’s book, Ascension: The Shift to the Fifth Dimension, on amazon here

Get a Private Session with The Arcturian Council (or any of the other beings I channel) for 50% Off. Enter Discount Code LOVE at Checkout