Light Language for Accessing & Integrating All of Your Mayan Lifetimes & Abilities

The Mayans. They don’t get as much attention as the Egyptians, Atlanteans, or Lemurians, but they certainly do deserve to have the same amount of attention. The Mayans were so advanced, they knew the exact date of our shift to the fourth dimension (from the third…December 21st, 2012). And a large number of them were actually able to ascend to the fifth dimension! That’s pretty impressive. If you don’t know if you’ve had a lifetime as a Mayan, that’s okay. You can still use this light language transmission to access someone else’s Mayan records and integrate their knowledge and abilities. (That’s called an imprint or an overlay). That’s how connected we all are. I channeled this light language with the intention, vibration, and galactic light codes to bring that which is Mayan into the whole of who we are now. Love! <3 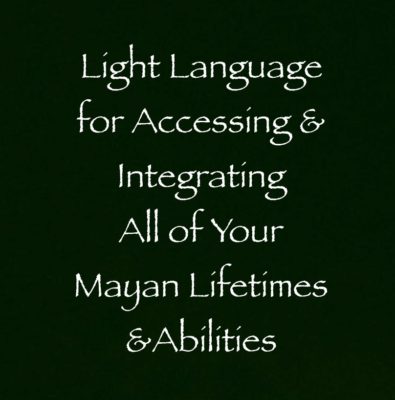