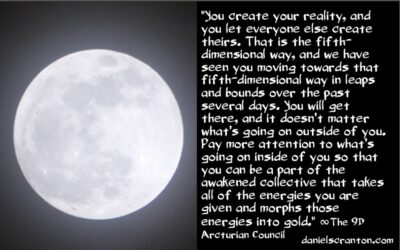 It’s Not About the Full Moon or the Eclipse ∞The 9D Arcturian Council, Channeled by Daniel Scranton

We are very sophisticated in our analysis of the overall vibration of humankind. We are able to analyze the little shifts that you make as you ascend, and we are able to see what spurs these little shifts on inside of all of you. Lately, we have noticed that you are shifting and spiking because you are doing so much work on yourselves, and you are getting so much further along than you would have if you weren’t in the current set of circumstances you are in.

Certainly, you can get a boost from a full moon, from a solstice, or some solar activity, but you are still the ones who have to remain open enough to receive and who have to take what you are getting and do something with it. We have seen a tremendous amount of clearing going on in the human collective. You are clearing your fears of mortality, your fears of dying a traumatic death, your fears of being impoverished, or a financial collapse in your economic system. You are processing so much because you are in the middle of a crisis there on Earth.

And the crisis was created by all of you, not orchestrated by someone else or some group. You are powerful beings who use your consciousness, your energy, and your vibration to create realities that you know will serve you, realities that you know will catapult you into the next level of your spiritual evolution. And that is what you have done as a collective, and now is the time to begin to reap the rewards of having lived through all of the cleansing, all of the purging, all of the processing that you’ve been doing as individuals and as a collective.

You create your reality, and you let everyone else create theirs. That is the fifth-dimensional way, and we have seen you moving towards that fifth-dimensional way in leaps and bounds over the past several days. You will get there, and it doesn’t matter what’s going on outside of you. Pay more attention to what’s going on inside of you so that you can be a part of the awakened collective that takes all of the energies you are given and morphs those energies into gold.

Empaths: You Reach the Souls of All Humans ∞The 9D Arcturian Council

You’re Part of Our Galactic Team ∞The 9D Arcturian Council