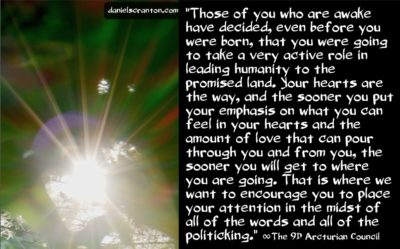 We are very familiar with your political systems and the way you elect the people who run your governments, and we know that most of you who are receiving this transmission are aware of the corruption that is embedded in the political systems that you have there. And we also know that there are many theories about who is doing what behind the scenes. Now, you have been putting faith in your political leaders and your governments for so long, and they have disappointed you all time and time again to the point now where you are completely disillusioned. You don’t know who is really for the people, and yet you continue to follow the elections and the words of the elected officials with a sense of hope that someone is going to come in and clean it all up.

And we are talking about more than just the corruption of bribery. We are talking about the corruptions of shadow governments, cabal groups, and all sorts of shady practices by very, very wealthy individuals who have access to extremely advanced pieces of technology. Again, we know that those of you who are experiencing this transmission are well-educated about all of these things and more, and so we are speaking to those of you who are still giving way too much of your attention to what’s going on in the governments and with the politicians who are supposedly running your governments.

We want so much for all of you to empower yourselves and to take your attention away from what they are doing in those government buildings and in those super secret meetings that don’t take place in the government buildings. We want you to experience yourselves as the ones in power, the ones who are there on Earth to integrate right and left, liberal and conservative, and all of the other polarities that you have and that play themselves out in these political arenas with such passion, but also with such hatred for the other side and the beliefs of those standing on the other side of the political spectrum.

We encourage all of you instead to look within your hearts and feel for your ability to integrate all aspects of self, your ability to love someone who votes for the other ‘team’ politically. We also want you to know how powerful you are, even though you will probably never hold political office and have the type of bank statement that these shadowy figures have. You are still powerful, and you don’t need to look outside of yourselves for someone to disempower those who are working against humanity behind the scenes. You need to come together in love and compassion and feel genuine forgiveness in your hearts for those who have taken advantage of a corrupt system that has been co-created by all of humanity.

This system that you are living in and under was not created in a vacuum. It was created by all of you, and it was created to test how far you could go without destroying the human race and planet Earth, and you have gone to the opposite ends of the spectrum very well and have managed to survive. And now it’s time for unity to rule. It’s time to put down your weapons that come in the form of your words and your hatred for those who believe something different than what you believe. It’s time for love to be what governs humanity, and that starts with each and every one of you to be the love that your fellow humans need so much, because you need love so much more than you need laws.

And those of you who are awake have decided, even before you were born, that you were going to take a very active role in leading humanity to the promised land. Your hearts are the way, and the sooner you put your emphasis on what you can feel in your hearts and the amount of love that can pour through you and from you, the sooner you will get to where you are going. That is where we want to encourage you to place your attention in the midst of all of the words and all of the politicking that is going on outside of you. Remember who you are, why you are there, and what you are there to do, and let that guide you more than ideology.

Register for Beyond the Ordinary Telesummit here

The Massive Changes Coming for Humanity ∞The 9D Arcturian Council