The Way You Are Ascending to 5D ∞The 9D Arcturian Council 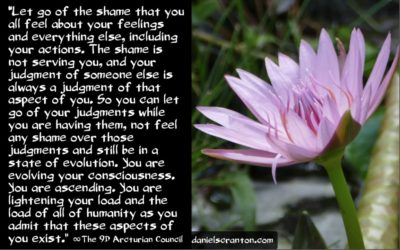 The Way You Are Ascending to 5D ∞The 9D Arcturian Council, Channeled by Daniel Scranton

You are releasing hate, fear, judgment, prejudice, rage, despair. You are releasing the lowest of the low. You are not only releasing the emotions, but you are also releasing the thoughts and beliefs. When you release something, you have to be aware of its existence. You cannot release anything that you are not looking squarely at as you let it go. That means in order to release hate, you must feel hate. Therefore, feeling hate doesn’t make you less spiritual. Becoming aware of the judgments you hold doesn’t make you less awake. Having your fits of rage doesn’t mean that you will not be invited to the ascension party.

This is the time where you get to experience all of these things for one last hurrah, and as you release them, you will feel less heavy, less dense. You will be in a light body. You will ascend and become your higher self. You cannot do these things by ignoring those feelings, those thoughts, those beliefs, and those judgments. You cannot get there by pretending they don’t exist within you because you are such a shining beacon of white light because you could never let those dirty, nasty aspects of humanity and Source into your being-ness.

It’s time to let go of the shame that you all feel about your feelings and everything else, including your actions. The shame is not serving you, and your judgment of someone else is always a judgment of that aspect of you. So you can let go of your judgments while you are having them, not feel any shame over those judgments and still be in a state of evolution. You are evolving your consciousness. You are ascending. You are lightening your load and the load of all of humanity as you admit that these aspects of you exist. They are there.

You don’t have to pull them out and partake in them on purpose, but you do have to admit that they exist within you, as they exist within everyone else. That’s the way to evolve and to ascend. It is the only way that we know of.

We are certain that there are others telling a story about e.t.s landing their ships and taking you all off into a fifth-dimensional paradise, but that is not the story we are telling. Ours is not as attractive a story as that, but we know that you can feel the truth of what we are saying. We know that the bridge to the fifth dimensional experience is all about compassion. You can start building that bridge by having compassion for having to experience all of that negativity, all of that heaviness, and all of that shame that you’ve endured in all of your lifetimes as a human being.