What You are Destined to Become ∞The 9th Dimensional Arcturian Council 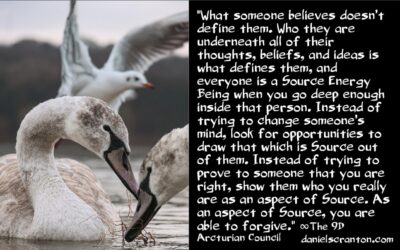 What You are Destined to Become ∞The 9D Arcturian Council, Channeled by Daniel Scranton

We are extending ourselves out to all of humanity, regardless of whether the individual believes that we exist. We do not care about your beliefs. We only care about bringing out more of the love, more of the flow of Source Energy from you. We tell you this now because we see how much you are splitting yourselves in two, based on your beliefs there on Earth.

We see this as something that disempowers you, even though most people feel that their beliefs make them smarter, stronger, and more powerful, as though they are armed with a better perspective, with more knowledge. And to look down on someone else because they don’t see something the same way that you do not only creates a split between you and that person, but it also creates a split within yourself.

Every person that exists outside of you represents an aspect of you. And maybe that aspect is from a previous lifetime, but it is still a part of you. Some people would even like to eliminate others, wipe them off the face of the Earth, because of their beliefs. And again, they are just suppressing, diminishing, and trying to snuff out an aspect of themselves.

Obviously, this does not serve you. What someone believes doesn’t define them. Who they are underneath all of their thoughts, beliefs, and ideas is what defines them, and everyone is a Source Energy Being when you go deep enough inside that person. Instead of trying to change someone’s mind, look for opportunities to draw that which is Source out of them. Instead of trying to prove to someone that you are right, show them who you really are as an aspect of Source. As an aspect of Source, you are able to forgive. You are able to see all perspectives as valid in some way. And you always look to help, you always look to heal, when you are being that ultimate version of you.

Think about all of the people whose beliefs you find deplorable, and now recognize how all that time you’ve spent in judgment of them has only hurt you. It has only split you, and it has made the human collective less powerful, less capable, and further from becoming what you are destined to become. You are destined to become a harmonious human collective, so you might as well start now by letting go of that need to be right, that need to draw a line in the sand, that need to choose a side.

Just accept right now, even with the world is in this moment, that you are all one, you are all Source, and you are all coming together as one, whether you like it or not. Acceptance is freedom. Freedom will allow you to expand and become more, and that is the definition of going with the flow. As we said, it’s what you’re all going to do, so why not start right now?

Manifest Your Desires: Law of Attraction/Law of Creation ∞3-Week Course