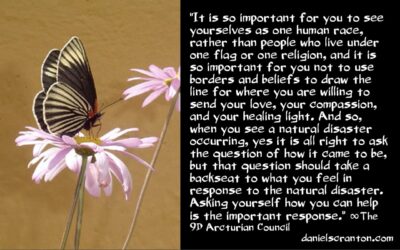 Your Journeys to the 4th & 5th Dimensions ∞The 9D Arcturian Council, Channeled by Daniel Scranton

We have been very interested in the journeys that you all took to get to the fourth dimension from the third. We have been exploring and investigating what you had to do to make that leap with your consciousness, and what we noticed in our investigation was how much love and compassion you felt for each other in the wake of the terrorist attacks that had taken place in the years prior to 2012.

You made the leap forward in consciousness because there were more of you who were feeling compassion for all people affected by those attacks than there were people feeling rage and demanding vengeance. This is something that you continue to show in the cataclysmic events that have occurred since December 21st, 2012. December 21st, 2012 was the date when you shifted to a fourth dimensional frequency range. And now, in the seven plus years since you have seen more natural disasters, along with continued war efforts and terrorist attacks, and the love and compassion continues to increase for all people affected.

This is huge. It is so important for you to see yourselves as one human race, rather than people who live under one flag or one religion, and it is so important for you not to use borders and beliefs to draw the line for where you are willing to send your love, your compassion, and your healing light. And so, when you see a natural disaster occurring, yes it is all right to ask the question of how it came to be, but that question should take a backseat to what you feel in response to the natural disaster. Asking yourself how you can help is the important response. It is the necessary response in order to become more of who you really are.

Fighting with others about what caused the disaster, the mass shooting, or the terrorist attack doesn’t serve anyone. And so, we enjoy witnessing that growth and evolution occurring. And as it continues to occur, we will remain hopeful. But hope isn’t even the right word for how we feel about humanity. We are certain that you are evolving and becoming your fifth dimensional, higher selves.

The New Energies Upon You Right Now ∞The 9D Arcturian Council

What Is Newly Available to Humanity Now ∞The 9D Arcturian Council