A Mass Landing of UFOs/Spaceships ∞The 9D Arcturian Council 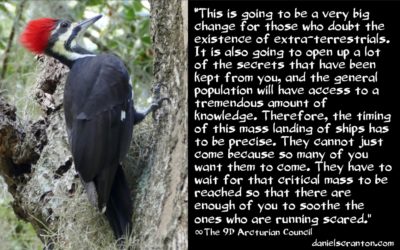 A Mass Landing of UFOs/Spaceships ∞The 9D Arcturian Council, Channeled by Daniel Scranton

We are talking about a mass landing of ships that would be for everyone to witness. We know that ships land on Earth all the time, that people go on board those ships and have beautiful interactions and journeys with their e.t. friends, but we are talking about the landing of ships in areas where there would be so many witnesses, and also, the media would get involved.

When you have amateur footage of UFOs, or more accurately put, spaceships, you also have a tremendous amount of doubt. Now, as much as people are doubting the mainstream media these days, when all of them, regardless of their political leanings, are reporting the exact same occurrence, it becomes harder to doubt. There will still be those who believe that the mass landing of ships will be faked, but eventually, the ships will come to almost every major city so that everyone will be able to experience contact and so that it will be undeniable that what they are seeing is real.

People will feel the energy coming off of their new e.t. friends, and that too will be an undeniable experience. All right, now, back to the timing of this. It certainly is something that a great deal of you have been asking for, and there certainly are plenty of e.t.s who would like to answer that call, but you need a critical mass situation. You need a situation there on Earth where there will be more people embracing the e.t.s than there will be people ‘freaking out.’ And you’re getting closer and closer to that percentage. You are receiving this transmission because you are amongst the ones who would embrace your new friends from outer space. We know that, and you know that. We also know that you’re not going to convince anyone with your evidence that e.t.s exist and that they visit regularly. You’ll have an even harder time convincing people that they are walking among you.

So this is going to be a very big change for those who doubt the existence of extra-terrestrials. It is also going to open up a lot of the secrets that have been kept from you, and the general population will have access to a tremendous amount of knowledge. Therefore, the timing of this mass landing of ships has to be precise. They cannot just come because so many of you want them to come. They have to wait for that critical mass to be reached so that there are enough of you to soothe the ones who are running scared.

Again, you are closing in on that number, and a big part of that is the amplification of the desire for great changes on your world. Those desires will result in more individuals having their gradual extra-terrestrial experiences. When we say ‘gradual,’ we mean that they will build upon first experiencing them in dreams and through visions and channeling experiences, and then gradually working their way up to face-to-face contact. As many of you know, this is inevitable. It’s going to happen, and it’s just a matter of time.

Listen to the replay of my episode on the Beyond the Ordinary Telesummit podcast &/or sign up for the Making Contact with E.T.s course

The Massive Changes Coming for Humanity ∞The 9D Arcturian Council