Are You Going to War with the Dark? ∞The 9th Dimensional Arcturian Council 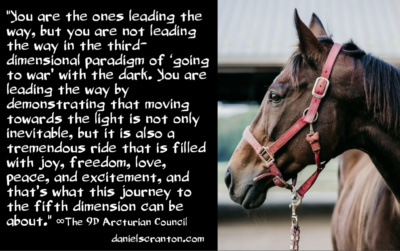 Are You Going to War with the Dark? ∞The 9D Arcturian Council, Channeled by Daniel Scranton

We are letting ourselves expand with every passing moment. We can feel within ourselves an innate desire to become more of who we really are and to slowly release the limitations of the ninth dimension, as we slip into the tenth. We are a part of this universal shift in consciousness that humankind is at the center of there on Earth. You all have the biggest leap forward to make, and that is why there is so much attention on you at this time. That is why you have so many helpers, so many interested parties, and it is also why you are struggling there on Earth.

It is hard to let go of the old ways in order to embrace what is new and different. There are, of course, those of you who are very eager to leave it all behind and ascend, but then there are the stubborn ones who are against progress and change. They have been benefitting so much from the inequalities that exist on your world, and they would like to continue to do so. These are the individuals you would like to shake awake, but that doesn’t work. And as we have told you many times before, you are not leaving anyone behind. You are taking all who want to come with you, and those who don’t know they want to come will know eventually that there is something more to experience there on Earth.

You are the ones leading the way, but you are not leading the way in the third-dimensional paradigm of ‘going to war’ with the dark. You are leading the way by demonstrating that moving towards the light is not only inevitable, but it is also a tremendous ride that is filled with joy, freedom, love, peace, and excitement, and that’s what this journey to the fifth dimension can be about for all of humankind if you are willing to let it be that.