Ascending in Spite of Your Oppressors ∞The 9D Arcturian Council 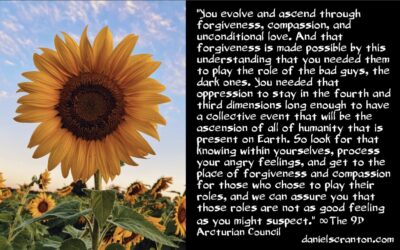 Ascending in Spite of Your Oppressors ∞The 9D Arcturian Council, Channeled by Daniel Scranton

We have been witnessing the struggle that humanity has endured with being oppressed, and we understand why so many of you are angry about this oppression. We understand why you are angry with government officials, cabals, and negatively-oriented extra-terrestrials, and we feel compassion for you for what you have endured there on Earth. We do believe, however, that we can help to alleviate some of the suffering that you’ve experienced by reminding you that you are very powerful beings and that you do create your own reality.

So all of the oppression that you have experienced has been necessary to give you the third and fourth-dimensional experiences that you have been able to have there on Earth. Were it not for the oppression, you would have moved through the third dimension very fast, and many of you would have shifted to the fifth dimension before the rest of humanity was ready. We saw this happen with the Mayans, for example, where many of the Mayans ascended because they were simply ready to. Now if this had continued on Earth, you would have had civilization after civilization ascending, and those who were not so fortunate to have chosen to incarnate in an advanced civilization would have endured even more suffering and even more oppression.

So those of you who have been holding the space for all of humanity and holding the higher vibration that you do for your collective have created a balance there, and that balance was necessary to give all of you the numerous experiences that you wanted to have before shifting. Remember that everything is a choice on some level. Just because you don’t remember making the choice to incarnate there and be oppressed doesn’t make it any less of a choice. Now that most of you who are awake have also become aware of your oppressors, you feel a great deal of anger and you want justice. You want to them to be taken down, imprisoned, and some of you even look for their deaths as a necessary punishment for what they have done.

But this is not how you evolve and ascend. You evolve and ascend through forgiveness, compassion, and unconditional love. And that forgiveness is made possible by this understanding that you needed them to play the role of the bad guys, the dark ones. You needed that oppression to stay in the fourth and third dimensions long enough to have a collective event that will be the ascension of all of humanity that is present on Earth. So look for that knowing within yourselves, process your angry feelings, and get to the place of forgiveness and compassion for those who chose to play their roles, and we can assure you that those roles are not as good feeling as you might suspect.

Having all of that power and all of that money is meaningless without love. And some of these beings who have been your oppressors have even come to that conclusion through the lives that they have lived, and they will need ones like you who are awake to forgive them. And this is what we believe is necessary as well for the ascension of all of humanity.