Critical Mass for E.T. Contact Has Been Reached ∞The 9D Arcturian Council 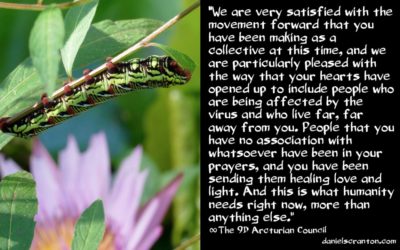 Critical Mass for E.T. Contact Has Been Reached ∞The 9D Arcturian Council, Channeled by Daniel Scranton

We are very satisfied with the movement forward that you have been making as a collective at this time, and we are particularly pleased with the way that your hearts have opened up to include people who are being affected by the virus and who live far, far away from you. People that you have no association with whatsoever have been in your prayers, and you have been sending them healing love and light. And this is what humanity needs right now, more than anything else.

While there are doctors feverishly working on getting a cure of some sort for the virus, those of you who are awake are brewing up more compassion than there has ever been on planet Earth before. Your numbers are a factor here. You can look around at the world, which is filled with more people than it has ever had upon it before, and you can see that there are some very bad people doing some very bad things. And you might even believe that they represent half of the human collective. You might still believe that half of humanity is operating from a place of darkness, and only half of you are coming from the light.

But those who are operating from the light within them are far outnumbering those who are playing the role of the dark. Therefore, you as the collective of light, are generating enough compassion to push humanity into an even higher vibrational frequency than if something good was happening all around the world, affecting every single person in one way or another. And we want to point out that this amount of compassion shows your readiness for extra-terrestrial contact. It shows that humanity as a collective has gone beyond where you needed to go vibrationally in order to be seen as ready for that full, open e.t. contact that you all want so much.

And so, that is another byproduct that is a positive thing, a positive outcome, coming from something that could only be described as negative in nature. It is, however, how you respond to something negative that defines you, and you as a human collective are taking what is right in front of you and spinning it into gold. You are responsible for taking humanity further than the collective has ever been before, and you are doing so with the light, love, and compassion that you are holding within you right now.

As we said, the numbers matter. There has been a critical mass that has been reached, and you are going to be living on a much different planet very soon, because of what is happening right now. These are very interesting, chaotic, and exciting times for humans on Earth, and we promise you that you’re going to start to see evidence of what we are talking about, and you will recognize it as your own handiwork.

Get a Personalized Mantra from The Arcturian Council, or any of the other beings I channel here

You Hold the Master Key to This ∞The 9D Arcturian Council

The Awakened Collective: Answer the Call ∞The 9D Arcturian Council