Light Language For Releasing All Blocks to Channeling 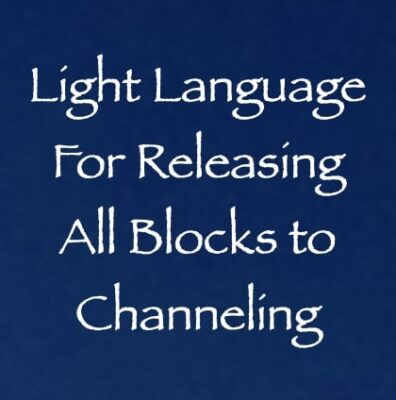 This 6-Minute Light Language is for Releasing All Your Blocks to Channeling, Channeled by Daniel Scranton

How Will This Light Language Release Your Blocks to Verbal Channeling?

Before I ever channeled the first five words I ever spoke: “We are here for you,” I received the wisdom from the collective known as Abraham that I needed to work through my resistance before I could start verbally channeling. I didn’t know exactly what my blocks were to channeling, or why I would have any resistance to doing something I loved so much, but that’s the thing about blocks and resistance…they can come from anywhere, even a past life or lives. That’s why I created this light language for releasing all of your blocks to verbal channeling. I know how hard it can be from my own experience to even understand why or how you could be blocked to doing something you really want to do. And the beautiful thing about light languages is that they bypass the mind, so you don’t ever have to uncover what those blocks might be in order to benefit from this recording. Light languages contain galactic light codes, energy, an intention, and a vibration, all specific to the unique light language being spoken. I must have spoken thousands of unique light languages by this point in my journey, as I began speaking them in May of 2011. This light language will jar loose those blocks you have to channeling because that was the intention I held for it, and after listening just once, you might find yourself channeling for the very first time. Joy! <3