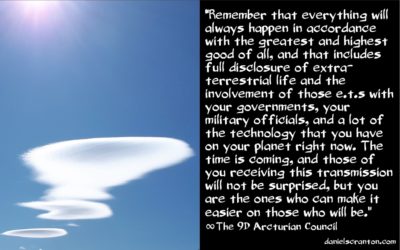 We have begun to investigate the possibility that you will be given certain key pieces of information about the existence of extra-terrestrials and which government leaders have known about their existence and kept it from you. We have seen the various timelines in which this type of evidence comes to light that would be unquestionable and from a very credible source, and what we can see is that most of humanity would not find themselves in a state of shock or rage.

Most people would not begin building bunkers for themselves and their families. Most humans who are unaware of the cover-ups would be disappointed and want to point fingers at this, that, or the other political leader, but the existence of extra-terrestrials being made known to all of humanity would not have the effect of widespread panic.

If you have your full disclosure event presented to you by a government leader, the likelihood of that leader using disclosure to his or her advantage is extremely high. We are not talking about just photographic evidence or video. We are talking about much more than that being presented to the entire human population, and we see this is as a positive choice that humanity is going to make.

We see your higher selves debating about when the opportune time is for this disclosure event. We see that the people who would be freaking out the most are the ones delaying the entire process, and that’s to be expected. You cannot expect every human to be all right with the existence of extra-terrestrials when it goes against something they have held very dear to themselves, like a religion. There is also fear that is generated because of past life experiences that people have had with extra-terrestrials and the traumas they still hold from those experiences.

This is something that we continue to study and analyze, and every time that we bring it up to you, there is of course the truth that you are that much closer. You are closer now than you ever have been to everyone knowing without a doubt that e.t.s existence and that they have been in contact with humans for millions of years. This is the timing that you all wanted for this to occur in, regardless of what your ego and your mind is telling you. So if you are wondering why it didn’t happen thirty or forty years ago, it is because of the agreement you all had as a human collective consciousness.

Remember that everything will always happen in accordance with the greatest and highest good of all, and that includes full disclosure of extra-terrestrial life and the involvement of those e.t.s with your governments, your military officials, and a lot of the technology that you have on your planet right now. The time is coming, and those of you receiving this transmission will not be surprised, but you are the ones who can make it easier on those who will be.

Listen to the replay of my episode on the Beyond the Ordinary Telesummit podcast &/or sign up for the Making Contact with E.T.s course

Why Most Romantic Relationships Don’t Last ∞The 9D Arcturian Council

Starseeds: You Will Get to Go Home ∞The 9D Arcturian Council