Get Excited About the New Earth ∞The 9D Arcturian Council 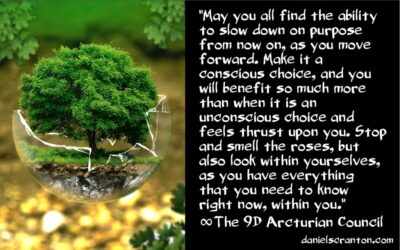 Get Excited About the New Earth ∞The 9D Arcturian Council, Channeled by Daniel Scranton

We are so very happy to see so many humans coming back to a place within themselves of stability and hope. We notice when there is any type of change there within the human collective consciousness, and we have noticed that many more people have been grounded in their physical bodies of late and accessing excitement about what is to come there on Earth. We know that you have been through a very hard time there on your world, and it has lasted for over a year now, much longer than most people assumed it would be affecting all of you, this pandemic. And we know that you are becoming so much more of who you really are as a result of the adversity you have faced, but we also know that spiritual growth is often not the goal for humankind.

People seek comfort, predictability and joy. People seek love, abundance, and freedom, and a lot of what you had once taken for granted there on your world has been hard to come by of late. It has been much harder for most to pursue their dreams, or even to live their lives in the way they had become accustomed to living. Now as you can see the light at the end of the tunnel, we see how much the pandemic has actually served humankind. It has gotten people to prioritize, to examine themselves and their relationships, their work, and their choices.

That is why you all co-created it in the first place. You wanted to slow down, and even stop in some cases, to evaluate yourselves and your lives. And now that so many have cleared so much from their root chakras, you are ready to build a new society and a new Earth from the ground floor. You have so much more stability because you have been forced to face issues, trauma, and stuck energy that was in your root chakras.

With that strong foundation, you will move forward confidently as a collective and as individuals within this human collective, and you will create the world that will start to represent what life will be like as fifth-dimensional beings on a fifth-dimensional planet. But this is a time to get excited, right now, because of what you have all been co-creating while awake and while asleep, since all of this began, and you were forced to slow down.

May you all find the ability to slow down on purpose from now on, as you move forward. Make it a conscious choice, and you will benefit so much more than when it is an unconscious choice and feels thrust upon you. Stop and smell the roses, but also look within yourselves, as you have everything that you need to know right now, within you.