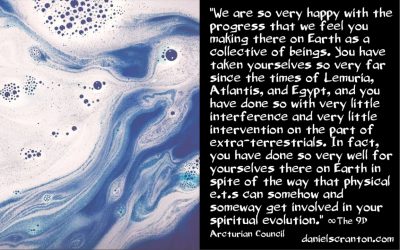 We are so very happy with the progress that we feel you making there on Earth as a collective of beings. You have taken yourselves so very far since the times of Lemuria, Atlantis, and Egypt, and you have done so with very little interference and very little intervention on the part of extra-terrestrials. In fact, you have done so very well for yourselves there on Earth in spite of the way that physical e.t.s can somehow and some way get involved in your spiritual evolution.

This time that you are living in now is the time for you to step up and show your readiness to be a part of the galactic community, of which you are a part. It is not time for e.t.s to just land their ships and disrupt your natural evolution, as they did during the times of Lemuria, Atlantis, the Egyptian Empire, and other times throughout your history.

You would have done fine just on your own, because even without physical e.t.s coming and landing their ships, you still have that extra-terrestrial DNA inside of you. Some of you have a lot more of it than others, but everyone there on Earth has some, and that e.t. DNA gets activated by all sorts of occurrences that have nothing to do with you actually being visited for face-to-face contact. Even UFO sightings are not entirely necessary to give you the activations of your e.t. DNA, but living your lives and having all of the experiences that you have, these are the best ways for you to access what is buried deep down inside of each and every one of you.

You’ve all been higher-dimensional beings, and you can all become so much more than you could at any other time in human history, and that is because every part of you is evolving to keep up with the energies that you have upon you, energies that have more to do with your sun and the photon belt than they do beings and collectives like ourselves and what we are capable of sending you.

It was always a part of the plan for you all to evolve on your own, because the Earth experiment is part of a much bigger story, a story that was initiated by Source. And you are the aspects of Source that are best equipped to bring humankind into that higher level of consciousness that we, and others, refer to as the fifth dimension. We want you to feel proud of what you have accomplished and what you will accomplish. And we want you to know once again that you have everything you need inside of you, and you always have.

You are not going to repeat what happened on Lemuria, Atlantis, and in Egypt. You are going to go far beyond what those ancient civilizations where capable of accomplishing, and you are going to do it because of what is inside of you. This we know to be true.

How to Explore the Galaxy ∞The 9D Arcturian Council