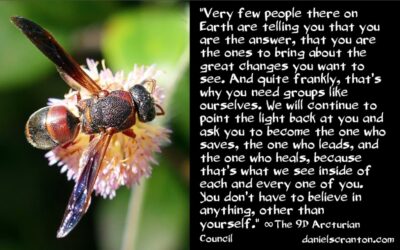 The Changes You Have in Front of You ∞The 9D Arcturian Council, Channeled by Daniel Scranton

We are so very enthusiastic about the changes that you have in front of you. A lot of people on your world are talking about the problems, the issues, that you are facing as a global community, and even within your smaller communities. And then you tend to argue over what the problems really are, who is behind them, and what is needed in order to fix them. But there is something that many people are not allowing themselves to do.

People are not allowing themselves to take all of the energies that are being summoned at this time, receive them, and then co-create with them all of the changes that they want to see. And why is that? Why are not enough people feeling empowered to create the changes that they want to see? The truth is that in the time you are living in right now everyone has their version of ‘the solution,’ ‘the answer,’ and the solution and the answer usually involve a person or a group, possibly even e.t.s.

Very few people there on Earth are telling you that you are the answer, that you are the ones to bring about the great changes you want to see. And quite frankly, that’s why you need groups like ourselves. We will continue to point the light back at you and ask you to become the one who saves, the one who leads, and the one who heals, because that’s what we see inside of each and every one of you. You don’t have to believe in anything, other than yourself.

Now, if you believe that you are much more than the self that you see in the mirror, that’s even better. But even people who didn’t have that knowing have accomplished quite a bit just by believing in themselves. But add Source Energy, a legion of angels, collectives, councils, federations, families, and so on, and you’ve really got something. You’ve got a team, and when you take into account the fact that humanity has been summoning all of this energy, and you have a team surrounding you that wants nothing more than to help you create the change you want to see, then you must ask yourself why would you still be looking outside of yourself for the answer.

The truth is, and will always be, that everything outside of you is also inside of you. Come together with a bunch of other humans who know that, reinforce that truth to one another, and now you’ve really got something to work with that will bring about the change, elevate the consciousness of humanity, and have you ascending with ease and joy. That’s what we are enthusiastic about because we know that enough of you are receiving this message to do what we are talking about, to do it well, and to keep doing it until you are living on the version of planet Earth that you want to experience.