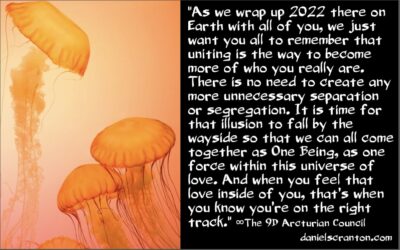 We are very aware of the energy and consciousness of competition there on Earth, and we know that even different beliefs are held up against each other. Therefore, the Christmas holiday was placed very close to the solstice so that attention would be taken away from the solstice and be put on the Christmas holiday. Many of you recognize that December 25th is not the date those four stars came together to create one giant light in the sky, and it is not the date of the birth of the one called Yeshua. It was a date that was chosen to be not so close to Easter and very close to the solstice to take attention away from that beautiful celebration. And now you have far fewer people celebrating the Summer/Winter solstice than you do people celebrating the Christmas holiday.

Now, of course, the teachings of Yeshua are very important and the life that he led is one of mastery. It is an example for all of you of how you can be there in the world. And so, there doesn’t need to be any competition between celebrating this wondrous occasion within Nature and the celebration of the birth of Yeshua. Both can be celebrated, and both can be seen as having their place in the human collective consciousness. We encourage you to celebrate the solstice in whatever way that you desire to give thanks to your sun and to Mother Earth, and you can also celebrate yourselves for summoning so much energy on the solstices and equinoxes that you have there on Earth.

You are there to anchor in those energies, to let those energies run through you, and to share them with your fellow humans. You are there to merge consciousness, to integrate, to unite, and therefore, you don’t have to point out the commercial nature of Christmas or get mad at those people who chose to compete with the solstice in order to bring more people to the church. You can celebrate both, and you can see the two dates being close to one another as an opportunity to merge consciousness. It is an opportunity to bring the Earth and sky together.

There once was a time when the gods were seen more as dwelling amongst you and being in the wind and the mountains, the ocean, and so on. And once they were placed up high in the sky, there became a greater separation between human and Divine consciousness. But you are there to unite, to bring all consciousness together into One. God is everywhere and everything, and we are all representations of that which some call God and we call Source. Again, there is no reason to compete over what the right word is for that energy, that consciousness, that force that dwells within each and every being.

Now, as we wrap up 2022 there on Earth with all of you, we just want you all to remember that uniting is the way to become more of who you really are. There is no need to create any more unnecessary separation or segregation. It is time for that illusion to fall by the wayside so that we can all come together as One Being, as one force within this universe of love. And when you feel that love inside of you, that’s when you know you’re on the right track.

You will be told that there is still plenty of energy and consciousness on Earth that you are meant to oppose, to battle against, and to judge, and that simply is not the case. It is all there to reflect to you something that you need to love within yourself and outside of yourself. And when you do that, you know that you are one who unites, and you know you are fulfilling that aspect of your mission for this life on planet Earth.