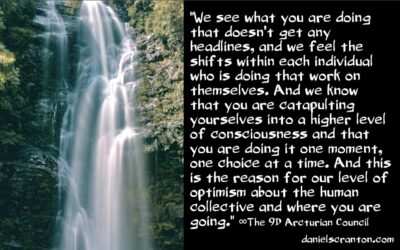 The Energies Being Sent to You Need Recalibrating ∞The 9D Arcturian Council, Channeled by Daniel Scranton

We have been recalibrating the energies that we are delivering to you, based on the very big steps forward you have taken over the last several weeks. This new year has brought with it new hope for so many, as you continue to move towards your entry point to the galactic community. There are more awakened souls on planet Earth today than there have ever been at any other point in human history there on Earth. The word is getting out, and not only that, but the work that people do on themselves, whether they are religious, atheist, or spiritual is paying off for the entirety of the human collective.

An atheist spending time working with a therapist and getting into a higher-vibrational state is as valuable to the human collective as a spiritually awake person who is meditating and doing yoga. A religious person who uses the more enlightened passages in their religious texts to get closer to Source is benefitting the human collective through that endeavor. There are many paths to God, to Source, to All-That-Is, because all paths lead there. And so, it does not matter so much what you do or what you believe, so long as you are striving to become a more whole being, a person who operates from love and compassion, rather than from fear and judgement.

Therefore, we talk to you a lot about the number of awakened souls and being a part of the Awakened Collective, but really it is everyone there on Earth who is tipping the scales, who is making a difference in the overall vibration of the human collective consciousness. It doesn’t matter what you believe in when you see a country that is under attack, and you feel compassion for the people who are dying in that war and whose homes are being destroyed. When you feel compassion for those who have just had a major earthquake, tsunami, hurricane, or other natural disaster, you are helping to bring humanity to that next level of consciousness, and anyone can do that. Anyone’s heart can go out to the victims and the families of a bombing or a shooting.

And because more of that is happening now than ever before in human history, you are growing by leaps and bounds, and we have to keep up with you. The energies we send out must be of the right frequency to help. Now, of course, there are so many people who are still thinking about what is wrong with humanity and life on Earth at this time, and to so many it seems like things are getting worse and not better. But remember that you as a collective tend to shine a spotlight on the problems in an attempt to fix them, rather than shining a spotlight on what’s going right and celebrating yourselves, your accomplishments, and your progress.

So that’s why you have us and others like us who will continue to nudge you towards the most positive and powerful timelines, because we see what you are doing that doesn’t get any headlines, and we feel the shifts within each individual who is doing that work on themselves. And we know that you are catapulting yourselves into a higher level of consciousness and that you are doing it one moment, one choice at a time. And this is the reason for our level of optimism about the human collective and where you are going, and for those of you who are sensitive, for those of you who are willing to open up and feel into the energies that we are sending to you right now, as a result of all of this progress, we say to you, “Enjoy!”