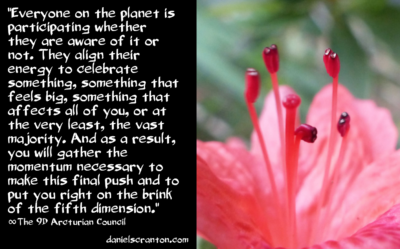 You are facing a potential that you have yet to face as a human collective. You are facing the potential to move to the highest level, or octave as some refer to it as, in the fourth dimension. This potential exists in part because of all of the work that you’ve been doing, and it is also supported by the energies of the solstice, the Christmas holiday, and the New Year.

The alignment that is available to you because of those three events can propel you to the final realm of the fourth dimension, the highest frequency range that you have been able to hold thus far as a collective on an ascension journey. Now, of course, you have come close to ascending previously on planet Earth, but never before have the conditions been so perfect for you to make that journey.

Why now, you might wonder? What is so important about this time in human history? As we have said, the number of awakened individuals on planet Earth has never been higher, even though the overall percentage is still low. You are getting to a point of reaching that critical mass.

We want you to understand that this is a group effort, and that everyone on the planet is participating whether they are aware of it or not. They align their energy to celebrate something, something that feels big, something that affects all of you, or at the very least, the vast majority. And as a result, you will gather the momentum necessary to make this final push and to put you right on the brink of the fifth dimension.

Receive a Love Letter from Your Higher Self, Divine Team, and Soul – Channeled by Maricris Dominique Dela Cruz-Scranton