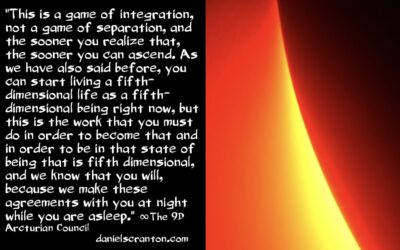 We are eventually going to convince each and every one of you to give up the struggle, to stop seeing the world, or certain elements within the world, as acting against you. We will eventually convince you that it is all there for the purpose of your spiritual growth and evolution and that it was all put there by you. In other words, with our help, you will finally let go, surrender, and embrace the world outside of you as it is. You will eventually see it as perfect because of all of the opportunities it gives you to become more of who you are.

And by ‘the world’ we mean all the institutions, all the people, all the groups, everyone that you have been taught is bad and should be arrested and punished or wiped from the face of the Earth. You will see them as aspects of yourself that you are there to forgive, love, heal, and have compassion for, and the experience of letting go of all of that resistance within you will open you up to a sensation of unconditional love, the likes of which you have never felt before. Now, you get to practice being unconditionally loving with those you hold dearest to you, especially the little ones and the animals. But to be able to be it and hold it as a state of being within yourself, these are accomplishments that few have made there on Earth.

Now, we want you to recognize that you don’t have to do this all at once. You want to continue to take the baby steps that you’ve been taking to ascend, to become your higher selves, because that will be the most rewarding and enjoyable journey. Make a promise to yourself right now that you will take one baby step today towards that goal of surrendering and letting go of your resistance to all that is outside of you and inside of you that you have been pushing against, that you have not been able to accept just as it is.

This is the most powerful practice that you have at your fingertips all the time, and eventually, as we said, you will get tired of the practice of holding resentment, anger, fear, and hatred. You will want to let these experiences go, even though you were always supposed to have them in the first place. So you can also let go of guilt for ever believing that there’s something outside of you to fight against, that you are the victim and they are the oppressor. You are The Creator, and you are there to experience yourself as such. Nothing will be as satisfying as you becoming more of who you really are.

We know that it is fun, on some level, to have an enemy to defeat, to externalize all that is dark within the self in one person or one group. We understand that. We’ve seen your movies, and you’ve had a lot of fun playing that game, but this is a game of integration, not a game of separation, and the sooner you realize that, the sooner you can ascend. As we have also said before, you can start living a fifth-dimensional life as a fifth-dimensional being right now, but this is the work that you must do in order to become that and in order to be in that state of being that is fifth dimensional, and we know that you will, because we make these agreements with you at night while you are asleep, and we continue to nudge you in that direction, transmission after transmission.