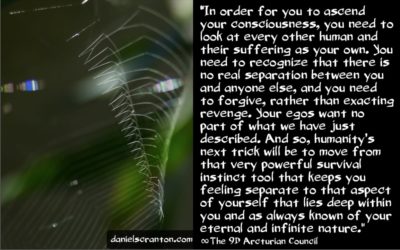 What You Need to Do in Order to Ascend ∞The 9D Arcturian Council, Channeled by Daniel Scranton

We have been appreciating your willingness to endure such extremes there on planet Earth. We look at you as the ones who have the greatest ability to make the most out of tragic scenarios. We are not the only ones who see humanity in this light. You are far more impressive than you realize, and what has made you so impressive is the very thing that you are being asked to shed at this time. It is the will the typical human to survive that is the key component of the ego, and as you are becoming your higher selves, you need to set aside that survival instinct and replace it with compassion.

In order for you to ascend your consciousness, you need to look at every other human and their suffering as your own. You need to recognize that there is no real separation between you and anyone else, and you need to forgive, rather than exacting revenge. Your egos want no part of what we have just described. And so, humanity’s next trick will be to move from that very powerful survival instinct tool that keeps you feeling separate to that aspect of yourself that lies deep within you and as always known of your eternal and infinite nature.

It is as if you are shifting from being mere humans to becoming gods, and that’s what is so exciting about this time you are living in there on Earth. You are re-inventing yourselves, becoming something that you once feared and saw as being very, very far away. It is a monumental leap forward, this shift in consciousness for humanity. And so, now that you are all awake, and by ‘you all’ we are referring to those of you receiving this transmission, it is your mission to help others recognize their own Divinity.

How do you do that with someone who would see the mere suggestion of such a thing as blasphemy? Well, the truth is you are still getting a lot of help from their higher selves, their spirit guides, their oversouls, and a myriad of other beings, like ourselves. Therefore, it is not really your job to convince them, those who are still asleep, of who they really are. It is your job to see them as they really are, and help them through the shock of that realization when they have their own experiences that make it quite clear that there is no separation between God and human, just as there is no separation between human and human.

Remember that, and recognize how fortunate you are to believe it, to know it, and to be the ones who are being asked to live it. It is a privilege and an honor, and you are ready.

Get a Private Session with The Arcturian Council (or any of the other beings I channel) for 50% Off. Enter Discount Code LOVE at Checkout. Discount code is also good for channeling lessons and ALL recordings

Register for the next Beyond the Ordinary Telesummit – My Interview with John on the topic of: Attracting Your Soulmate & Soulmate Relationships will be on January 28th at 5PM Pacific

Register for the Butterfly Effect Telesummit (I’m in it)