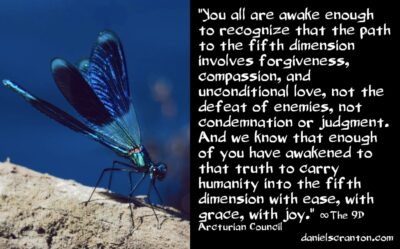 Your Evolution Isn’t About Defeating the Cabal ∞The 9D Arcturian Council, Channeled by Daniel Scranton

We are very pleased with the progress that we can feel humanity making at this time, and we know that a lot of the progress that you make is because of the hope, the belief, the faith that you have in the truth that humanity is evolving and expanding to become your fifth-dimensional selves. Some of you are tapped in, as we are, to the collective consciousness of humanity, and you can feel the movement forward right along with us. Others look outside of themselves for evidence of the evolution of consciousness of humankind, and they feel discouraged. They feel sad because what is not going well there is amplified.

And then there are humans who are pinning all of their hopes on things that are supposedly happening behind the scenes, alliances that are reportedly defeating the cabal groups. There’s a lot of that, and we know that you understand that some of those people who are reporting those stories are doing so without any evidence or facts. And so, we suggest that you become a part of the group of human beings who is not looking to the media or the conspiracy theories, but rather, looking within themselves for the feeling of the expansion of consciousness that is upon humanity right now.

We advise you to become one of the human beings who trusts their intuition, their sense, their knowing above all. And as you tune in to what you can feel in regards to the evolution of the human collective consciousness, you will not be disappointed. You all are taking the current circumstances on your world as an opportunity to co-create a better fourth-dimensional Earth and to co-create a better experience of shifting to the fifth-dimensional Earth.

You are the ones who lead by example the rest of humankind, and you do so by taking the time to go within and feel for what we feel when we tune in to the human collective consciousness. You are doing it. You are getting there, and you don’t have to rely upon anyone who operating secretly to defeat ‘the bad guys.’

You all are awake enough to recognize that the path to the fifth dimension involves forgiveness, compassion, and unconditional love, not the defeat of enemies, not condemnation or judgment. And we know that enough of you have awakened to that truth to carry humanity into the fifth dimension with ease, with grace, with joy, and with so much more connection to beings in other realms, like ourselves.

We are here, always, and we invite you to tune in to our vibration so that you can feel what we feel, and hold that light of hope, of faith, and ultimately of knowing that you are ascending and that everything that is happening on Earth at this time is a part of that. We know this to be true, and we invite you to join us in living that truth.