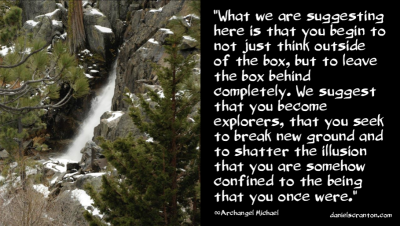 “Welcome. We are here to serve and assist you.

Prior to incarnating into your physical bodies, you knew exactly what you were signing up for. You knew more than just where you would be born and to which parents. You had a template for this lifetime, and you were eager to explore that template.

Once you began living your lives, you were given opportunities to make different choices. And depending upon which choice you would make, you would have different experiences. All of these possibilities were still contained within the original template. In other words, you would not make choices that would lead to your becoming the president of the United States if that was not a part of the original template for this lifetime.

You have now reached a point in your evolution as a human race where you get to go outside of that original template. You get to create possibilities that did not exist when you were exploring this particular lifetime prior to your incarnation. What that means is that free will just became freer and more expansive.

When you passed the date, December 21st, 2012, you embarked upon a new era, a new age. And now, almost three years later, you are ready to begin practicing the use of this freer will. Limitations are always self-imposed, and the release of limitations is also an inside job.

So what we are suggesting here is that you begin to not just think outside of the box, but to leave the box behind completely. We suggest that you become explorers, that you seek to break new ground and to shatter the illusion that you are somehow confined to the being that you once were. Create yourselves anew and become the multidimensional beings of love and light that you have always been.

We are Michael. We are infinite. We are Love.”