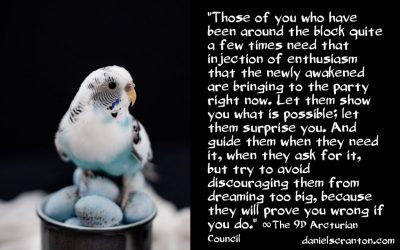 We are electrified with enthusiasm about where you are headed as a collective there on Earth. We have noticed how many individuals there on Earth have awakened recently, and we have felt their enthusiasm, their excitement, their eagerness to explore who they really are and what they can create. The newly awakened actually have an advantage in the creation department, an advantage that those of you who have been awake for a while didn’t have. They are coming to this realization at a time when there are faster moving energies upon all of you.

It’s all right, and it’s understandable, but it’s also time to throw off those shackles that are self-imposed and to realize that you are living in a brand new era. You are swimming in uncharted waters, and you have more energetic support for what you want to create than there has ever been on planet Earth at any time in human history. Get ready to go further, to manifest more quickly, and to become the masters that you were always going to become, even though a lot of you have given up to a certain extent.

Some people are just waiting for the shift to be complete so that they can instantly manifest all the time, but those of you who can feel the energies upon you know that this is a beautiful time to be in creation mode. This is a wonderful time to have your hearts, minds, and eyes set on the proverbial prize. You are standing in the midst of an evolution of consciousness right now on your world that is unprecedented, and we would like to see more of you who are old souls getting more of what you desire.

Those of you who have been around the block quite a few times need that injection of enthusiasm that the newly awakened are bringing to the party right now. Let them show you what is possible; let them surprise you. And guide them when they need it, when they ask for it, but try to avoid discouraging them from dreaming too big, because they will prove you wrong if you do.

The July 2022 Energies & Your Purpose ∞The 9D Arcturian Council