Your Process of Ascension ∞Quan Yin 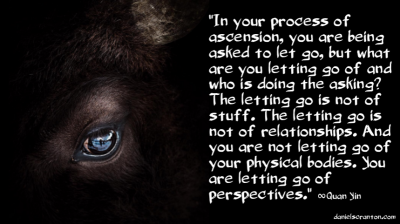 Any thoughts that you have of being better or less than because of your differences with another are the ones that are coming to you from the third dimensional perspective. Those thoughts no longer serve you. And so when you become aware of them, all you need to do is let go. You don’t need to fix anything or change anything.

Just remind yourselves that you can always choose to let go and to continue letting go until you anchor in the new perspectives that will become so ubiquitous that you will not even question their validity. You will use them to create your reality, and the reality that you create will excite you. It will be new, and it will be interesting, and it will breathe new life into your weary selves.

Show Your Gratitude – Make a Donation