Your Unrecognized Abilities ∞The Pleiadian High Council of Seven 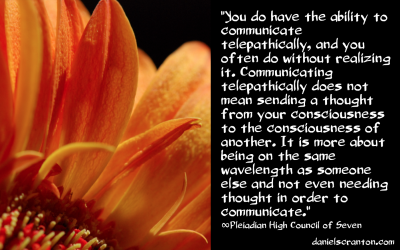 “We are the Pleiadian High Council of Seven, and we are pleased to offer you our words of wisdom.

Here and now, in this very moment, you are capable of so much more than you recognize. You are unaware of the abilities that you have, and because of this, you do not utilize them. What types of abilities are we speaking of?

You also have the ability to project yourself in more than one reality at a time. You often do this with your imagination. But because your physical bodies are only located in one particular reality, you do not understand that you have projected yourself energetically to wherever your imagination has taken you.

You also have the ability to see into the future. Now by ‘the future,’ we do not mean one future that exists for all beings that is unavoidable. We mean that you see a potential future that you are moving towards and you make course corrections. You do this all the time without acknowledging it.

You are capable of shifting your frequency with greater ease and precision than ever before, and again, you often do without realizing it. That is how you shift from one potential future to another. So it is time to start using these abilities consciously, because you are ready to begin knowing yourselves as more capable of communicating and of experiencing other realities and future probabilities.

And as you begin practicing consciously, then you will be able to tap in to other abilities like teleportation and telekinesis. The ones that involve more of your physical expression, and the physical expression of objects, are going to come at a later time for obvious reasons.

But what you have access to right now is fairly significant. And while one ability or power may seem more exciting than another, they are all equally valuable to you in navigating through your shift.

We are the Pleiadian High Council of Seven, and we are very fond of all of you. That is all.”