The Vibrations You Create Your World With – The Founders 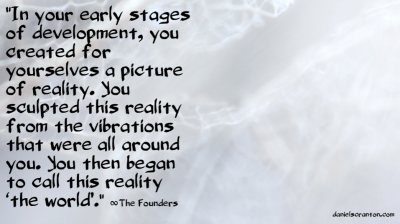 In your early stages of development, you created for yourselves a picture of reality. You sculpted this reality from the vibrations that were all around you. You then began to call this reality ‘the world.’

And then you reached a very pivotal stage of your development where you were able to decide. You were able to decide on whether to stick with your interpretation of reality, which was entirely based upon the vibrations that were most familiar to you. And the other choice in front of you was to create using a less familiar vibration, but one that was better feeling to you.

You began to select which vibrations resonated with you, and most of you are at the stage of your journey where you are choosing more and more those vibrations that resonate. And you are wanting to let go of the ones that do not. You are choosing to be conscious and deliberate about the vibrations you use to create your reality.

But there are those pesky vibrations that have become so familiar to you and so habitual that you sometimes find it to be very challenging to shake them, to let go of them. Well, from our perspective, those vibrations, while no longer resonating with you, are still a part of you, and you can include them in the Whole Self that you are.

But rather than seeing them as having some sort of hold over you, we suggest that you simply see them as a choice and that you take a more lighthearted approach to the fact that they represent choices you have made several times in the past. When you recognize their value and see them as valid and neutral choices, that is when it becomes easier for you to consciously decide that the vibrations that resonate with you are the ones that you want to create your reality with.

We are The Founders. We are the keepers of the flame.”

How to Explore the Galaxy ∞The 9D Arcturian Council